What Does Domestic Abuse Look Like in Communities of Colour? 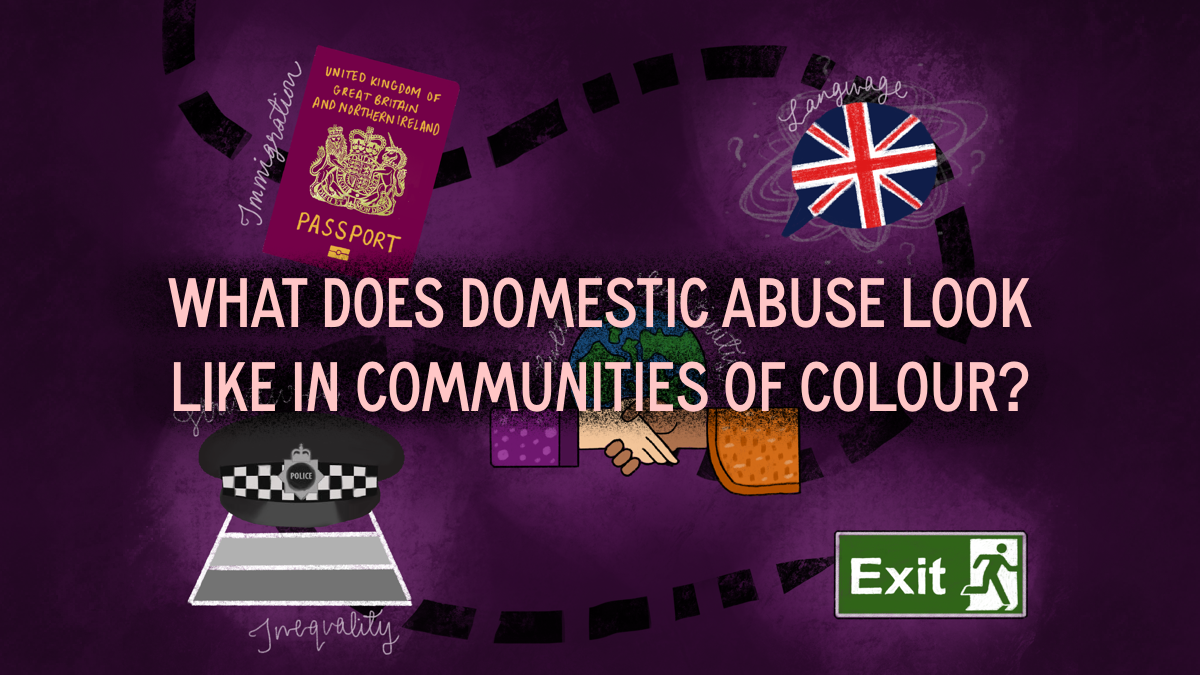 Marginalised people experience what we refer to as ‘additional barriers to accessing support’ in the domestic violence sector. This is an important distinction to make because it takes the blame away from the survivor. It also acknowledges the fact that many of us experience oppression for reasons out of our control, like our ethnicity, our sexuality, or our gender identity. There is no evidence to suggest that any racial group experiences domestic violence significantly more or less, but Black, Asian and Ethnic Minority people are significantly less likely to seek help. Analysing these additional barriers can help us understand why.

Having a British passport is a privilege that many of us are guilty of taking for granted. In the case of domestic abuse, the flag on your passport can often feel like the difference between accessing safety and fleeing violence.

With recent changes in immigration policy and increasing obstacles that are put in place for migrants, the migrant survivors of domestic violence are often unaware of their rights and the support available to them. For those who enter the U.K on dependent visas – where their stay in the U.K. is directly linked to somebody else – leaving an abusive relationship feels like an automatic ticket out of the country.  They are tricked by perpetrators into thinking that they do not have any rights in the U.K and therefore have no choice but to stay in the relationship.

Survivors who have ‘no recourse to public funds’ are not eligible for benefits in the U.K. In many cases, this stops them from being able to access refuges and safe accommodation. Other support is available, but this information is hard to access. Survivors who are undocumented are perhaps the least likely to seek help, as the fear of deportation overrules everything else. Fragile immigration statuses are used as a weapon to stop women speaking out about their injustices, but it does not have to be this way.

Talking about violence is never easy but doing so in a language that is not your mother tongue can feel impossible at times. Survivors should have the right to freely express themselves and their stories, instead of having to agree to things they do not fully understand. The fear of being misunderstood is a significant barrier in accessing support. Some people simply do not know how to call out for safety or what to say. Interpreters should be provided but often are not. Many perpetrators will deliberately limit victims from learning English as a way of keeping them trapped in the abuse. Their silence is forced, not out of choice.

Distrust of statutory services - like the police - is common amongst communities of colour. We have never needed evidence that structural racism and inequality exist Reporting to the police is not always an easy thing to do, especially if you do not feel like the police keep you safe. The fear of not being treated equally is crippling, which is why many people choose to stay silent.

The process of reporting to the police is also made very challenging by media representation. When we see people who look like us not being protected, it is only natural that we assume the same thing will happen to us too. The idea of being cross-examined and interrogated after experiencing trauma is too upsetting for some, which is another reason people do not ask for help.

As with all trauma, domestic abuse impacts us differently. For many of us, our culture and religion are wrongly used to justify violence. For most of us, our culture and religion are large parts of our identity. It is hard to speak about this dilemma to people who have no shared lived experience with us. The specialist domestic violence sector was made with this mind and in the hopes that speaking to someone who looks and sounds like you will make it easier to speak out.

Many things stop a survivor from reporting abuse, but the colour of their skin should never be one of these factors. In the face of a global pandemic, the specialist domestic violence sector is needed more than ever, particularly after such a spike in cases during lockdown.

You can access a range of support services on Spark and Co here.

This post was written by one of our Community Ambassadors, Violence Against Women and Girls Educator Ammaarah Zayna. Artwork provided by Khadija Said.

Find out more about Ammaarah and Khadija here.