Showing 30 resources related to islam. Click here to see resources across all topics.

Run by the Cornwall Islamic Trust, this is the first and only dedicated Islamic Centre in Cornwall. The centre holds a number of weekly and annual events including prayers, Sunday school, women's groups and other cultural responsibilities.

The Bath Islamic Society is based at Pierrepont Street very close to Bath police station. Being the only Mosque in Bath the make up of the congregation is very diverse and made up of Muslims from a wide range of Islamic countries. They run women's groups, youth groups and inter-faith programmes.

The Islamic Centre of the South West works with the community and neighbourhood through events, kids education, leisure and knowledge activities.

Hikmat Devon is a user-led co-operative working with members of black and minority ethnic communities across Devon. They run activity and interest groups, 1 to 1 mentoring, training, signposting, counselling and person centred goal planning. They speak a range of languages.

The first Masjid in the Dorchester area, they run prayers, celebrations, Qur'an, Tajweed and Arabic classes separately both for children and ladies, interfaith meetings, supporting community members with special needs and difficult circumstances, an after school club and more.

The NNMA works actively to promote tolerance and understanding. They are a member of the Norfolk County Council; this binds together Muslims from different backgrounds and strands of Islam.

Are you an LGBTQI+ Muslim? Questioning your gender or sexuality? Questioning your faith? Hidayah offer support and support groups for LGBTQI+ Muslims through monthly events in cities across the UK, a wellbeing and spirituality WhatsApp group, retreats, mentoring, educational workshops, emotional support, social media, confidential emails and volunteering.

Muslim Youth Helpline have a helpline 365 days a year for those at the point of crisis, as well as training and workshops for young Muslims, and undertaking research around the issues facing Muslim Youth.

Wrexham Muslim Association is an umbrella organisation for Muslims living in Wrexham and the adjacent areas of North Wales. They offer a range of religious, educational and cultural services to Muslims in Wrexham and the surrounding areas.

Specific Faith based councelling for Muslims within Birmingham. This type of counselling explores all aspects of counselling in a humanistic framework; which focuses on the (fitrah) natural disposition of mankind.

Muslim Women's Network UK (MWNUK) is the only national Muslim women's organisation in Britain. They are a small national charity and work to improve the social justice and equality for Muslim women and girls. They campaign, research, advocate and offer regional and local networks.

Finding A Voice is a social group providing support for South Asians aged 18+ of any faith, culture, religion or disability.

Enfield Muslim’s Women’s Aid provides relief for women and their dependent children who suffered or who are at risk of suffering domestic violence or abuse through the provision of accommodation, support and advice. Their number is 020 8920 3565.

The main aim of this society is to create a cultural, social and mutual support network for Devon and Cornwall’s increasingly large South Asian community. SAaS has a wide membership base of people who are drawn from countries surrounding the Indian sub-continent or are part of the Asian Diaspora. They provide social welfare, recreation alongside multicultural events.

The Scottish Ahlul Bayt Society is a faith-based (Shī’a Ithnā ʿAsharī ) organisation working to meet the needs of the Scottish Shia Muslim community and the breadth of society in general across the cultural, social, political, and religious spectra. We work to engage with other communities and faiths; strengthening ties in an effort to create a setting for religious and racial harmony, equality, and diversity in the nation.

The Edinburgh Muslim Community Association’ is a non-sectarian grassroots organisation formed in 2004 by a group of committed converts to Islam and Muslim youth of Scotland. The Association aims are to establish positive community cohesion between the Scottish Muslim community and the general public, provide practical assistance, care and promote unity in society and the Muslim Community. To find out more please visit the website.

The Jamia Masjid & Islamic Centre Slough offers a range of services and classes.

The Zainab Foundation reaches people through its bookshops, which provide a large range of Islamic books and ornaments bought from the UK and around the World. They have also donated books to be used for the National Curriculum. During the month of Ramadan the charity provides clothing and rations for those in need.

The Muslim Bereavement Support Service is a non-profit organisation serving the Muslim community by supporting bereaved women who have lost a loved one. They also work with other organisations, the NHS and hospices in particular, to give a spiritual context to the bereavement support services they offer.

The Inclusive Mosque Initiative is dedicated to creating safe and inclusive places of worship and spiritual practice, to the promotion of inclusive Islamic principles, and to centring and uplifting the voices and experiences of marginalised people within communities, including sexuality, gender, class and disability. They have a range of resources and events.

The All Ways Network works to empower small charities working with Muslims. They believe in having a strong support networks for our community of charities especially within the current rocky climate in the UK, with its constant cuts from the government. They support small charities via a range of services from webinars, focused group sessions on topics such as bid writing, to our annual Meet the Funders event and more.

An UK platform connecting Muslims who can give Zakat with those who should be receiving it locally. You can access their website to find out more or to apply for Zakat. They are currently offering support through four funds: Hardship Relief Fund, Housing Fund, Work Fund, and Education Fund.

BIMA is a democratic, national organisation that aims to unite, inspire and serve Muslim healthcare professionals across the UK, and promote a better understanding and appreciation of Islam amongst all healthcare professionals. During the pandemic, they put together an information leaflet to help inform the decision making for those responsible for administering religious burials.

The Muslim Council of Britain (MCB)

Amaliah.com is a online content platform dedicated to amplifying the voices of Muslim women. Amaliah have come together with Islamic Relief UK to create the Amaliah guide to getting through a lockdown Ramadan. Filled with the duas you need, how-tos, some soulful inspiration

5 Black Muslims You Should Know About

Islam and Black history go hand in hand. This has been the case since the start of the religion over 1400 years ago. From Bilal ibn Rabah to Malcolm X, Islam has never existed without Black Muslims. In the U.K. alone, Black Muslims make up over 10% of the Muslim population. Despite this, a quick
Image 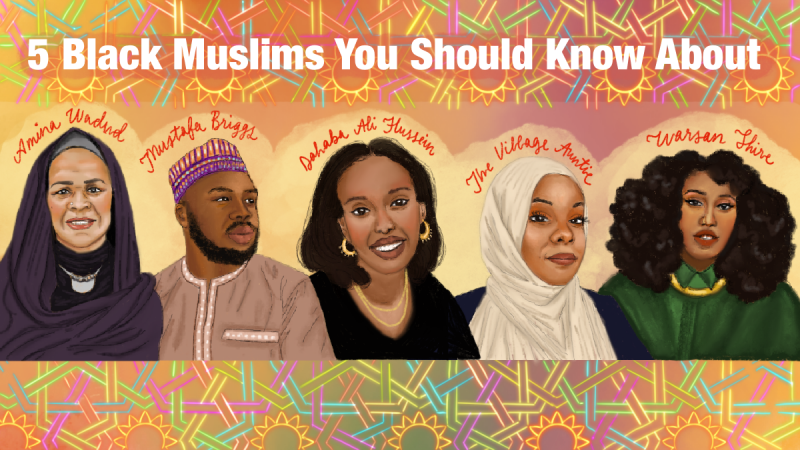